"THE CAT WHO CAME FOR CHRISTMAS"

REVIEWING THE BOOK:  “THE CAT WHO CAME FOR CHRISTMAS”

This book is about a rescued cat that teaches Mr. Amory, an avowed dog devotee (who knows nothing about cats), about cats.  It is also a touching description of the bond betwixt cat and human.  The rescuer, Mr. Amory, is a writer and the founder and head of the Fund for Animals.  He personally rescues and takes in strays.  He agreed to help rescue a sickly, injured cat from an alley in New York City on Christmas Eve.  The cat was afraid of people, did not trust Mr. Amory and did not want to be rescued. Accordingly, he resisted rescue & inflicted some pain on his rescuer.  Despite his injuries, Mr. Amory agreed to keep the cat but only overnight.  However, and all cat lovers know how this works, the cat decided that his rescuer did not really want to hurt him, that he could be trusted and that he wanted to stay with him.

So, from the moment that Mr. Amory awakens the next morning to find this sickly, dirty, rescued cat staring at him, he is under the cat's spell.  After giving the cat a bath, Amory discovered a beautiful white cat with bewitching eyes.  He named the cat Polar Bear and they began to learn to live together.  He learned that cats do not ‘come’ on command and don’t like travel, pills, leashes or diets.  Furthermore, cats choose their own friends.  Amory was a slow learner but Polar Bear was a patient teacher; Mr. Amory discovered what “being owned by a cat” means.

The story describes the events and the bond that deepens over their first year together.  The book includes interesting trivia on ancient feline history and celebrities who loved or hated cats as well as stories about his work as an animal rescuer. This is a book that both cat and animal lovers-in-general will enjoy. 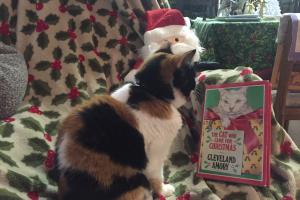 Just finished the tail, I mean tale, of Polar Bear...& I'm lookin' at him. Rescued from the freezing steets at Christmas, he taught his rescuer about cats &, in a way, rescued the rescuer. To read the book review on "The Cat Who Came for...