The Neely Cat Center in Pasadena, CA is named after a beloved 18 year old Siamese cat named ‘Neely.’  Neely’s owner-father, Bill Payden, wanted to establish a facility for cats that would provide compassionate, loving care. Following Mr. Payden’s death, his sister funded most of the facility from a $2.5 million dollar donation from the William R. Payden Philanthropic Trust.  The result is the Neely Cat Center.

My friend and the Cat Authors’ Auntie and sometimes-caretaker, Sharon, visited the Cat Center with me.  As Spirit described in his posting, there was a very compassionate mom at the Center looking for a kitten to join her family that consisted of two sons, their dad and a large but friendly dog.  Their beloved cat had ‘crossed over the bridge’ and they were ready for a new feline.  Most of the kittens were sound asleep but this one kitten (white with black markings) was awake, truly wide-awake, vocal and focused on engaging the mom in kitten-cat play.  The mom took pictures and videos of the kitten and headed home to show her husband and sons.  Somehow, I believe that kitten is now in his new, forever home.

Another lady, looking for a new kitten to replace a cat that had also ‘crossed over the bridge,’ found the kitten that she wanted, a four- month old Siamese.   I felt badly when the staff advised her that two other parties wanted the kitten.  The staff did call and one of those parties decided that they didn’t want that kitten after-all.  So, now there was only one person ahead of her.  It hurt to see the lady go back to the adoption room, stand outside the compartment and talk with the little Siamese kitten.  The kitten lay on his side with his little paws stretched out towards her giving her those little ‘kitty kisses’ or slow blinks.  On the other hand, as Spirit said, how cool that a shelter kitten is wanted by two different forever homes.  I believe that it is this relaxed, quiet environment that is so conducive to a kitten or cat being adopted.

The Center is a 4,000 square foot facility with room for 200 cats (in an emergency).   The Center has a nursery for nursing kittens, a feral cat room, enrichment equipment (designed and manufactured by Crijo Pet Products), a medical center, cat behaviorists, two community rooms (one for kittens and the other for adult cats) and, of course, volunteers.  The center has a system that exchanges air every 90 minutes.  Thus the potential of upper respiratory infections spreading among their kitten and cat residents is greatly reduced.

Cats, as well as other animals, are greatly stressed when placed in most shelters.  However, the Neely Cat Center is quiet.  The rooms for the cats have noise-reducing glass.  If visiting children squeal, the other cats are not disturbed.  The separate playrooms for the kittens and the adult cats are across from a third room where the adoptable kittens and cats sleep, lounge and play in their little compartment-condo-cages.  Each compartment has small cat furniture, a blanket, a separate feeding spot and, of course, a litter box.

The Neely Cat Center is attached to the Pasadena Humane Society (PHS).  PHS takes unwanted, homeless animals from the following cities:  Pasadena, Arcadia, Glendale, La Canada Flintridge, Monrovia, San Marino, Sierra Madre, Bradbury and South Pasadena.  With the creation of the new center for the cats, room was then available for other animals…rabbits, birds and reptiles.  As in most shelters, there are barking dogs looking for their new, forever homes.  Even though the barking dogs are directly adjacent to the Neely Cat Center, the barking cannot be heard inside the Cat Center.

Plans for the future include adding webcams in the cat and kitten playrooms.  Thus, people will be able to sit at home, view the cats and kittens and actually play and interact with them via computer-controlled laser toys.  Ah, the wonders of technology!  What will they think of next?

The Neely Cat Center and Pasadena Humane Society Staff were so helpful during our visit.  They answered our questions,  showed us all of the rooms with the amazing cat and kitten play equipment (crijopets.com) as well as the room with cats and kittens available for adoption.  Information for this article was obtained from an article in the San Gabriel Valley Tribune written by Jason Henry; the PasadenaHumane.org website; from interviewing Ricky Whitman, Vice-President of Community Relations at the Pasadena Humane Society & SPCA and our own observations 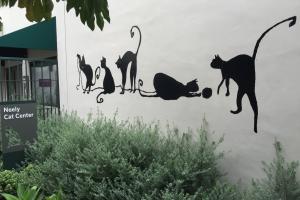 This is a new home for homeless 'meowies.' There are babies...er, kittens & adult cats. Their cat trees are fun & modern. We like modern...& fun. The kittens were asleep except for the one playing with a hooman. Bet he got a forever...