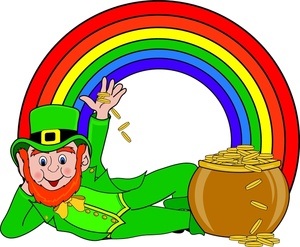 Saint Patrick's Day, March 17, honors Saint Patrick and celebrates ALL things Irish.  Saint Patrick is a Patron Saint of Ireland from the 5th Century.  He is considered the founder of Christianity in Ireland converting a society believing in more than one god. March 17 is the date of his death. Click on the title above to learn about: shamrocks, leprechauns, pots of gold and why we pinch someone not wearing green.

- Re the Shamrock:  Saint Patrick taught the Irish about the doctrine of the Holy Trinity via the Shamrock, a 3-leafed plant, to illustrate the teaching of 3 persons in one God:  the Father, the Son and the Holy Spirit.

- The Saint Patrick's Day leprechaun is an Irish fairy.  They are depicted as little (no more than two feet tall), old, bearded men (there are no female leprechauns), with pointy ears, dressed in green from head to toe that partake in mischief.  They are obsessed with rainbows and treasure, trickery and, of course, shoe-making.  They are described as solitary creatures who make and mend shoes and have a hidden pot of gold at the end of the rainbow.  Initially, they were depicted as wearing red coats and hats but are now depicted as wearing green coats and hats.

- It's believed that lepechauns pinch those who aren't wearing green which has developed into others pinching people to remind them that leprechans would not approve of their non-green apparel.

- If a human catches a leprechaun, the leprechaun must grant the human three wishes in exchange for his freedom.

- Leprechauns carry a big stick to scare anyone who tries to steal his gold.

- Leprechauns are known as roguish tricksters who cannot be trusted and will deceive whenever possible.

- In the world of magic, most spirits have a distinctive sound associated with them.  For leprechauns, it's the tap-tapping of their tiny cobbler hammer, driving nails into shoes thus annnouncing that they are near.

- No one 'sees' leprechauns anymore thus they are considered an 'endangered species.'  A trail in Carlingford, Ireland where the first leprechaun was 'spotted' serves as the official protected land for the country's remaining, living leprechouns according to a law filed with the EU.  The trail even has signs dotting the picturesque mountain landscapes asking hikers to tread lightly in the heavily leprechaun-ized area.  And a warning is posted to those in search of gold:  "Hunters of fortune seekers will be prosecuted."