FIP Awareness Day is Saturday, April 9 according to the 2016 Cat Writer’s Calendar of Cat Holidays and Causes.   The day is also called “Mr. Swanson’s Day.”  Mr. Swanson is a kitty that died from FIP.  Twenty-two years ago, I lost my precious cat, Mr. Tweedy, to FIP.  My husband used to say that Mr. Tweedy was “the cat of a thousand expressions.” We thought that he was trying to understand us by sweetly gazing up at our faces to learn what we were thinking.  He was the sweetest, most expressive, interactive cat that I/we have ever had.  I affectionately called him “my little Tweedy-Bird.” 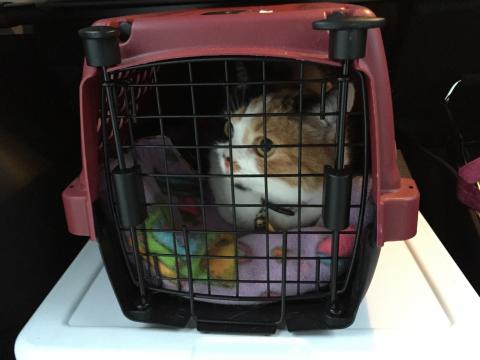 Guess what? I'm going 2 get a vacation! What? U meant 'vaccination?' But I want 'vacation.' 4 FIP? U mean the water-boarding, up-your-nose one? Puh-leze prey 4 me!  Meowl!! Read Related News article: "FIP Prevention"