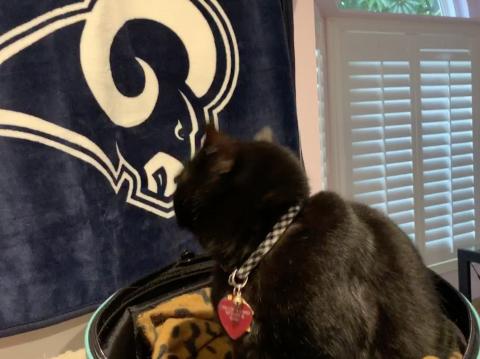 That's a ram? What big ears you have, Mr. Ram. Those are horns? They're hard? So when they ram someone or something it really hurts? Yikes. Then they should win. They're playing the Patriots? Isn't that an automated surface-to-air missle? Our cat-tionary says the Patriots detect & intercept incoming missles/aircraft & probably footballs!  So, the Patriots will try to intercept those footballs. But the Rams will ram 'em & get the ball. We live in Los Angeles so we're cat-fans for the Rams. GO RAMS!