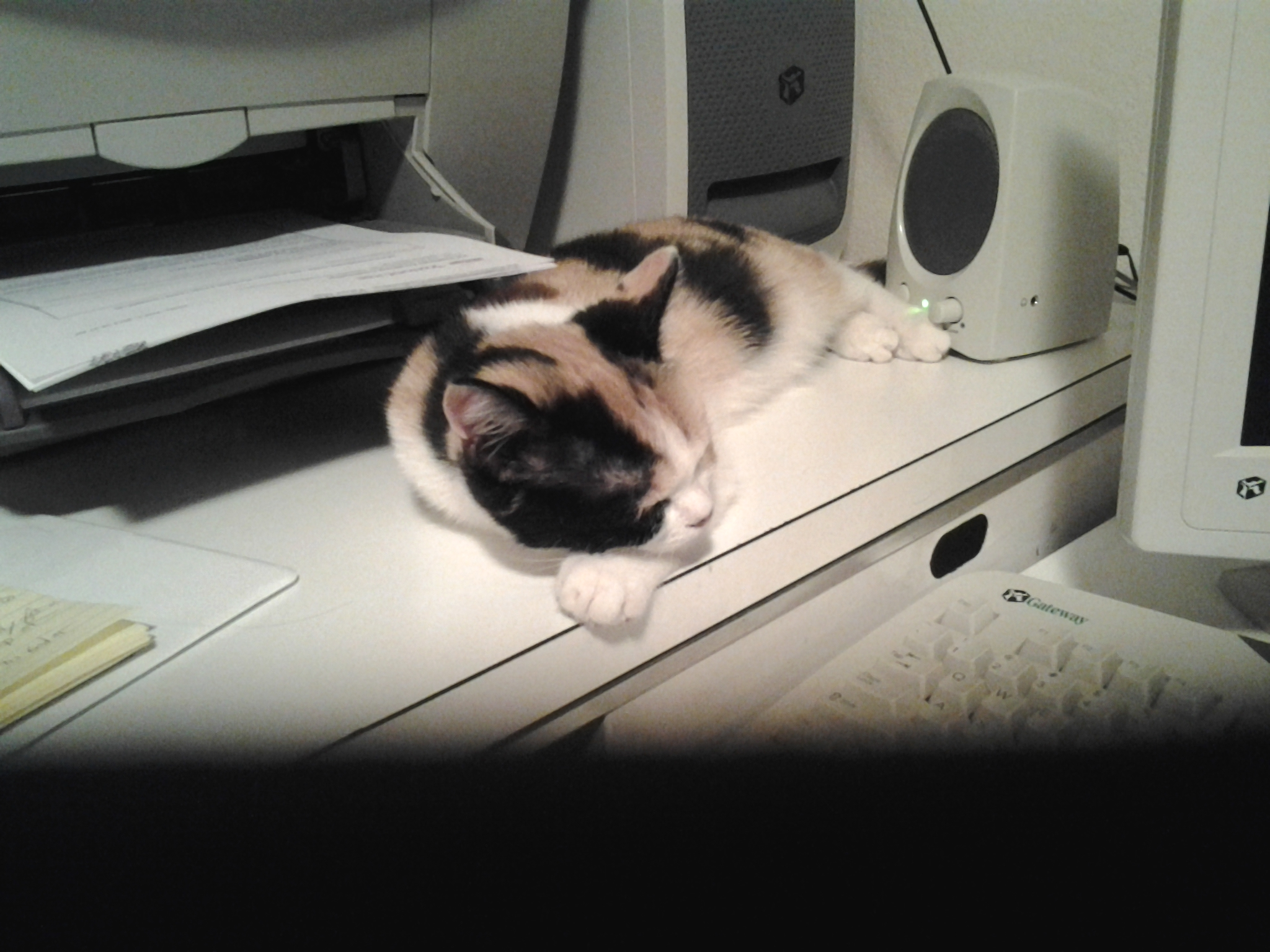 The above picture shows six month old Sophee, one of the Cat Authors, on her first evening in our home.  Sophee is a calico.  Calico is NOT a breed. It is a color, a pattern.  Calico cats have a coat of white fur with distinct patches of colors, usually orange and black.  In contrast, tortoiseshell cats (not to be confused with calico cats) have red, black, brown, yellow and/or orange colors woven throughout their coats.  They do not have the distinct colorful patches of the calico.  Some torties do have white fur with the mottled or woven coats but do not have the distinct calico patches.  Some cats actually exhibit both patches  (calico) and the mottled weave (tortoiseshell) in their coats.

Calico caretakers often attribute specific (sometimes negative) personality traits to calicos.  In reality, a calico’s personality is similar to their breed (and there are even differences within the same breed).  Sophee is a straight-eared Scottish Fold.  The breed is quiet with very soft voices.  One of my friends had a calico named Baby Kitty who was extremely out-going. As soon as you walked in the house, she followed you talking and talking.  Another friend had a calico named Spicey.  Spicey should have been named Feisty; she looked angry.  Feisty Spicey scratched and nipped at my friend and was usually aloof to visitors.

In contrast, Sophee has never had an angry, down day.  She adjusted to the house and other cats with ease.  She assumes that everyone (cat or human) loves her.  She is curious about anyone that comes to the house.  She stays her distance at first but she doesn’t run and hide like her sister, Gracee.  Sophee initiates games of chase and jumping with her siblings.  When she wants them to groom her, she walks up to them, lowers her head and, with total trust, gracefully stretches out in front of them. They automatically begin grooming her.  Her big, gold eyes close, relishing the attention.  I, her caretaker, exist to feed, brush and endlessly flip toys on sticks for her.  She is extremely athletic.  Her leaps are incredible.  She is very graceful and she runs faster on the cat wheel than her Mr. Hard-Body Egyptian Mau sibling, Spirit.  In the winter, she sleeps on my ankles.

Calico coloration is dictated by genes and chromosomes.  Most calicos are female.  They have brightly colored patches.  Male calicos are a genetic anomaly.  Their colors are muted, they may have health problems and, most of them are sterile. Sources vary re the percentage of male calico sterility...some say only one in three thousand are fertile; another source says only one in ten thousand males are fertile.

Folklore has it that calico cats bring good luck.  For centuries, their presence on ships ensured Japanese sailors safe voyages.  Maeki Neki, the Japanese talisman, is almost always a calico.  Her raised left paw means that the store or restaurant will get many customers; the right paw bestows good luck and wealth.  The higher the paw, the luckier you’ll be.

The word ‘calico’ originated in 1578 in Calicut, India (Southwest India on the Malabar Coast).  Calico was an unbleached, half-processed cotton fabric.  In India the cloth was woven/blended with orange-red and black-cream colors.

Information for this article was summarized and gleaned from the ‘Catster Magazine’, ‘About.com,’ 'Wikipedia' ‘Utsavpedia’ and my experience with Sophee, the Cat Authors and other calicos.