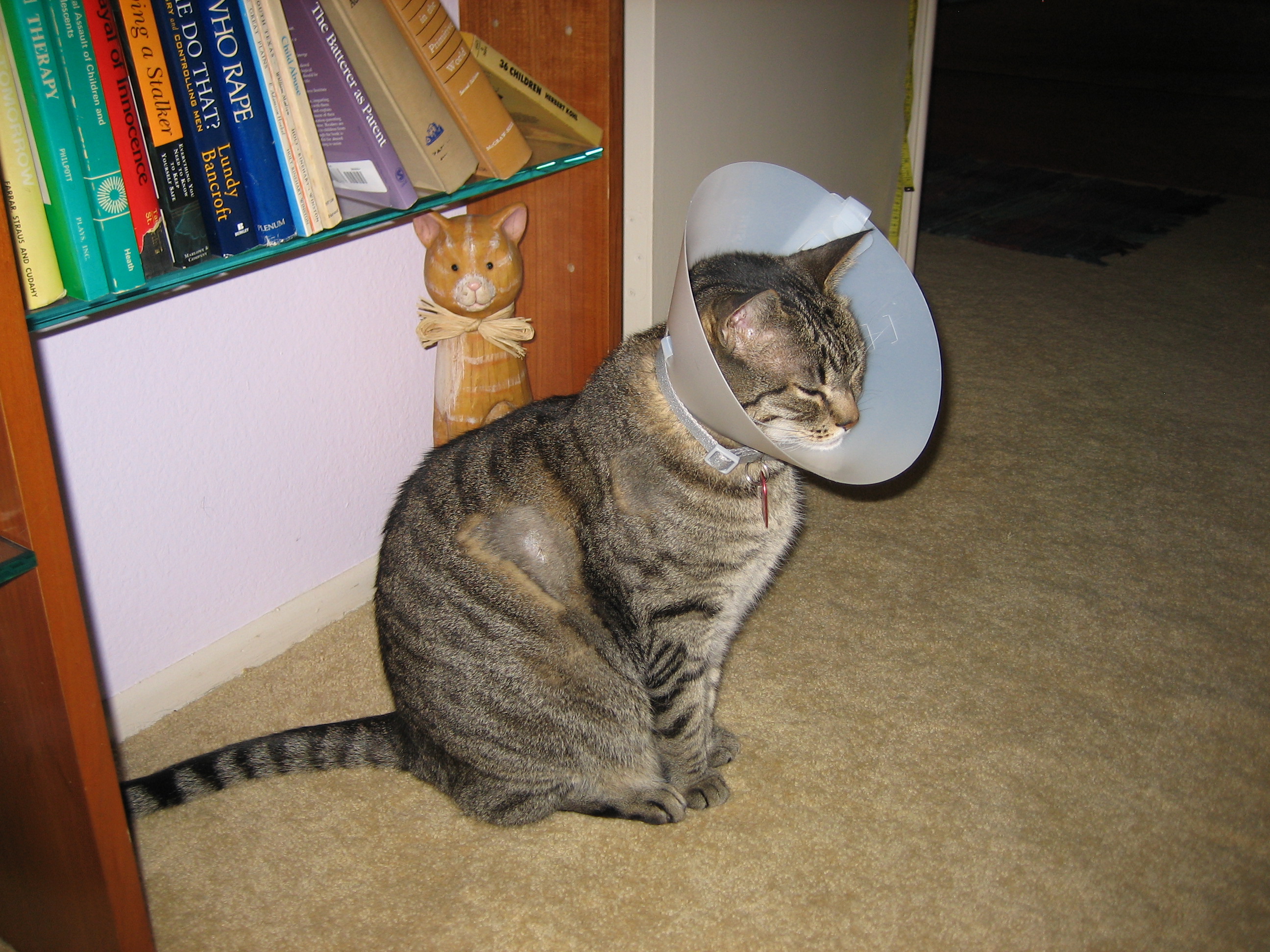 The above picture shows Tigger (who is no longer with us) following the removal of his third and last tumor.

What are mast cells?   Mast cells are a normal, white blood cell that forms in the bone marrow and matures in adjoining tissues.  These cells produce chemicals, including histamine.  Their purpose is to combine with other cells to fight invading material.  They are important in fighting allergic responses,  non-allergic skin diseases and assisting in wound healing.

What causes mast cell tumors?  Why mast cells develop into cancerous tumors in cats is unknown.  My vet said it might be something in their genes.  Mast cell tumors are the second most common tumor in cats; they are more common in dogs but, of all cat breeds, they are more common in the Siamese.  Many cats have multiple tumors on the skin.  The typical age of onset is ten years but kittens can have them too.  The skin tumors can spread to internal organs such as the liver, spleen and lungs.  If that happens, the cat loses weight, vomits and is generally ill.

What do mast cell tumors look like?  The mast cell tumor starts as a tiny, firm, hairless, white (sometimes pink) nodule on the skin.  The most common locations are on the head, neck and trunk.  Fifty percent are on the trunk.  They may resemble an insect bite, wart, tag or allergic reaction.  If left undiagnosed, the tumors become very large.  Pictures of cats with such large tumors brought tears to my eyes.

I discovered Tigger’s first tumor when he was stretched out in my lap and I was stroking him and fluffing his hair.  The second one I discovered while brushing him.  Other than the tiny tumor, he was very active and healthy.

How are the tumors diagnosed?  My vet aspirated a small sample with a fine needle and sent it to a lab.  We thought it was a tag or a wart.  I prayed that was what it would be.  But it was a mast cell tumor.  The tumor had to be surgically removed.  Tigger had to have two more removed over a period of several years.  There is concern that multiple mast cell skin tumors may be originating from mast cell cancer on an internal organ.  After the first tumor, I had the invasive internal organ testing/biopsies done by an oncologist and it was determined that, at that time, it had not spread to his internal organs.

Does the cancer ever spread?  Yes, mast cell cancer can spread to other organs.  At age 18, Tigger had a rapid and unexpected weight loss and I had to coax him to eat.  Blood tests were relatively normal.  But I suspected that the cancer had spread to his internal organs.  I did not again put him through the invasive tests necessary to determine if the cancer had indeed spread internally.   I also knew that, if cancer had been detected, that I could not subject him, at his age, to major surgery, chemo or radiation.  These are difficult, painful and very personal decisions that we, as their loving and responsible caretakers, are obligated to make.

Information for this article was obtained from the following sources:  VCA Animal Hospitals, Pet Cancer Center, Pet MD, DVM 360 and my own experience with my beloved Tigger who has ‘crossed over the bridge.’