CATS AND WHISKERS: Neck Cones (3rd in a Series of 3) 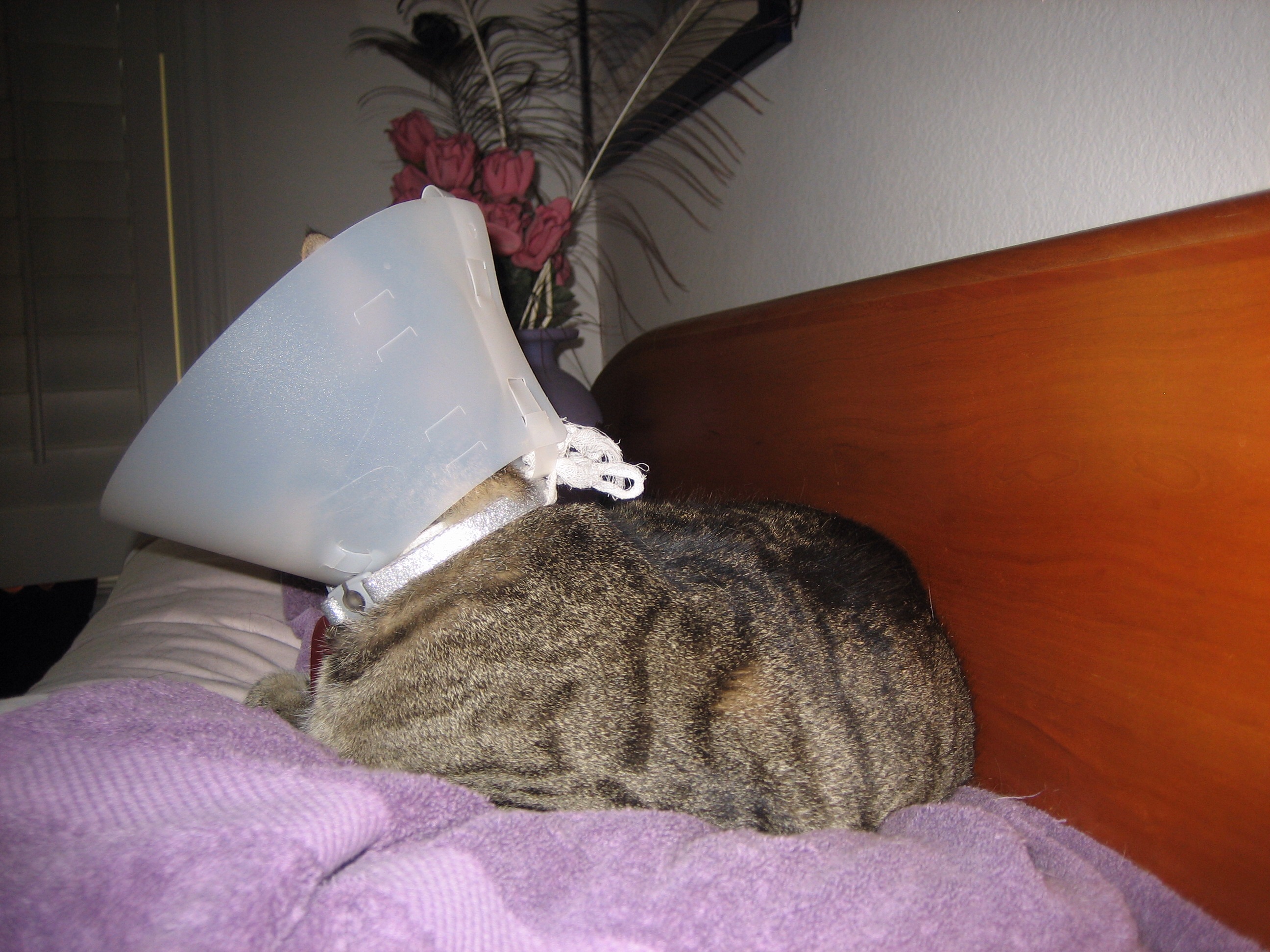 What is a neck cone?  It is a strip of plastic that fastens together to form a cone as shown on my cat, Tigger, who has since 'crossed over the bridge."   Note that the cone was secured to his collar to keep him from slipping out of it or taking it off. Cones now come in all shapes, colors, textures and sizes to fit the smallest kitten or puppy to the largest dog.  The problem with this traditional kind of neck cone is that it surrounds and disables the whiskers.  It also partially blocks the cats peripheral vision.

What is the purpose of a neck cone?  The neck cone prevented Tigger from scratching or tearing at his stitches.  This picture was taken in 2008 following the removal of his third, pimple-size mast cell tumor on his shoulder. I will discuss mast cell tumors in next week's MEWS 'N NEWS Article.  Please note:  it is important to periodically check and feel your cat's entire body under the fur to detect any lumps, bumps, swelling or sores.  No matter how small the protrusion feels to you, let your vet diagnose and decide whether further testing and/or treatment is needed.

What does the neck cone do to your cat?  The problem with neck cones (for a cat) is that the cone covers and blocks the whiskers.  Whiskers have teeny nerves (under the skin) that detect differences in air currents surrounding a piece of furniture or a tree.   The differences tell the cat that an object is there. Interestingly, a blind cat, can successfully navigate inside or outside by using the signals sent to his brain from those teeny nerves at the base of his whiskers.  For more details about how this complicated system works, please see the two prior articles titled:  "Cats and Whiskers" (first and second in a series of 3).

Although Tigger could still see, he could not walk in a straight line.  His whiskers (his GPS system) were disabled.  He could no longer judge where the edges of funiture, cupboards or walls were.  He ran into things. He appeared to be under the influence.  He had problems negotiating stairs, grooming, eating/drinking from his bowls, walking and finding a comfortable sleeping position.  The normally athletic, playful, vocal, running and jumping Tigger was reduced to a sad, quiet cat.  He moved through our two story house at a painfully slow, unsteady gait.

He had to wear the neck cone until his stitches were removed which was a period of one to two weeks.  As soon as the cone came off, he was Tigger again.

Information for this article was gleaned and summarized from:  PetMD, Wikipedia, "Today I found Out" and experiences with my cats, including Tigger, who has 'passed on' or 'crossed over tthe bridge.'