There are many differences between cats and dogs.  Some of the differences are listed below:

Dogs devour their food seemingly in a matter of seconds.  They can tolerate a lack of food much longer than cats.

Dogs scoop water into their mouths with their tongue.  It can be a sloppy way to hydrate.

Dogs can be trained quickly to obey basic commands like ‘come’ and ’sit’ as well as doing tricks.  They want to please the pack leader, which is, hopefully you, the human.

Dogs need to be trained.  Housebreaking a puppy is usually a hands-on, intensive project.  It can take months and some dogs never get there.

Dogs’ claws are always extended.  Thus, they are worn down as they run or walk.

Dogs run down their prey; they are long distance runners, not sprinters.

Dogs are social; they want to be with their pack which is you.

GAMES:  Cats enjoy pursuit, catch and pounce games such as a bouncing ping-pong ball, a ribbon dragged or twirled. .  My cats,Tigger (crossed over the bridge) and Spirit enjoy fetching.  Spirit and Sophee love running on their four-foot wide exercise wheel and do so without prompting.

Information for this article was obtained from the following websites: mercola.com with Dr. Karen Becker; Diffen.com; Banfield.com; and Catster.com as well as my own experiences with cats, including the Cat Authors. 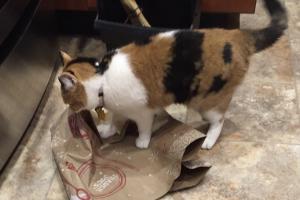 Check out the preceding videos of the bag-ripping competition between me and my canine-cocker-cousin, Lulu.  Then check out the "Differences:  Cats vs Dogs" article under LATEST NEWS or MEWS 'N NEWS.