Almost every two-legged critter knows who Florence Nightingale is.  But, one of the least known facts about her is that she was a devout cat lover.  In fact, they were her chief joy.  During her lifetime, she probably owned 60 cats.  She wrote to her parents:  “Cats possess more sympathy and feeling than human beings.” In another letter to her mother, she wrote:  “Dumb beasts observe you so much more than talking beings and know so much better, what you are thinking of…”

Ms. Nightingale spent 21 months in the Crimean War Zone, working among squalor and disease to care for the British soldiers.  One of the worst situations was the stupefying number of rats.    She wrote her sister about having to kill them with a broomstick.  Thus, she was very happy when a soldier presented her with a small yellow cat to help control the rodents.

After the Crimean War, her health was shattered.  She spent the next 52 years as an invalid and seldom left her living quarters.  Despite these infirmities, her post-war years were productive and prolific.  She authored books, wrote countless papers and pamphlets; in fact, her sitting room at the Burlington Hotel was known as the “Little War Office.”

Her close friends presented her a family of fine Persian cats.  They had elegant, long hair and were highly sought after.  Some of them were yellow and stripped, “almost like tigers and very wild.  It was not uncommon for six of these stripped yellow cats at a time to wander about her room at will.  She worked with a cat “tied in a knot around her neck.”  Others knocked over vases of flowers and navigated around piles of Blue Books, architectural drawings of hospital plans, and her Indian reports.  Her cats tended to upset her ink and made “unseemly blur’ on her papers.  The ‘blurs’ were actually imprints of their paws that are still visible today on many of her letters and drafts.

When she was not working, she played with her family of cats.  Although Ms. Nightingale took meticulous care of her cats, they were a constant source of worry and labor for her domestic staff.  They had finicky appetites and ate specially prepared food on china plates served in her room.  Her favorite cat, Mr. Bismarck, ate on a precise schedule and was partial to a little rice pudding with his 5 o’clock tea.  Their litter boxes were filled with weekly deliveries of imported sand and sod.

In 1865, she moved to a small house where she was bedridden.  For the last two decades of her life, she never left her second story bedroom that overlooked the luxuriant Dorchester flower gardens.  It was only her cats and watching the birds that brought her any degree of tranquility.  She ate alone and slept alone except for the cats that would lie on her pillow.  During her most difficult and saddest times, she found solace and comfort in her cats.

Florence Nightingale died in her bedroom in her small house on August 13, 1910 at the age of 90.  It is noted that she had made special provisions within her will for the continued care of the felines to whom she was so devoted.  The Nightingale collection of writings is one of the largest in the British Library.  There are also holdings in private and public collections all over the world.  Among these writings are the distinctive letters and drafts, which are stamped with the tiny paw prints of the Nightingale felines.  These particular pages are a visual representation of a little known aspect of the private life of one of the most extraordinary and accomplished women in Victorian history.

Information for this article was obtained from an article entitled “The Nightingale Felines” written and researched by Joy Shiller RN, BSN, MS, CAPA. 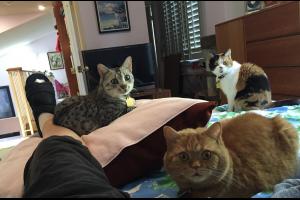 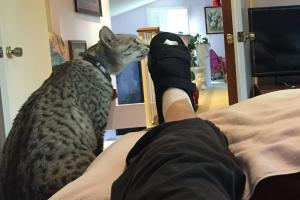 Sniff, sniff. What did the vet...er, doc do to Meowmuh's paw? She walks with steel things that go clunk clunk. Scary. We nurse her like Florence N? I forget--a bird. Read Related Mews N News Florence NightIngale & her 60...