An old tale explains the origin of the Scottish Fold’s unusual, folded ears.  It was said that the howling of the winds across the moors and the wailing of the bagpipes caused these cats to fold down their ears, shutting out the cold and the wailing music.

Most Scottish Folds are generally instantly recognizable by their unique folded ears.  The ears crease forward and down, giving the Fold an endearing, surprised, kitten-like expression.  Their heads are almond shaped with eyes that are large, round and gold.  Scottish Folds come in all colors and patterns.

Discovered by a shepherd in Scotland at a farm where he worked, Susie was the first cat with folded-down ears.  When she had a litter of kittens, two of them had this same type of ear.  The new breed was named the Scottish Fold.  Loving, quiet cats, they get along well with other pets but crave human companionship.  With tiny voices not often used, they are nonetheless heavy-boned, well muscled, and sturdy in appearance.  They love to hunt and are particularly resistant to diseases.

Information for this article was obtained from the book ‘For the Love of Cats’ by Dena Harris as well as my own experiences with the four Scottish Folds in my life:  Charlie Brown (crossed over the Rainbow Bridge), Gracee, Inkee-Bear and last but not least, Ms. Sophee. 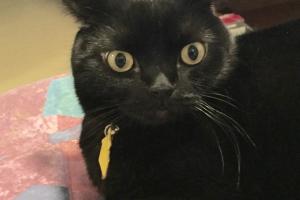 Where's she? I'm waitin' on Meowmuh to come to bed. What's that beepin? Oh, yeah, she's settin' the cat burglar alarm. I tell her we would take out anyone that comes in our house. We are quiet but strong & Spirit's fast, very fast. Together... 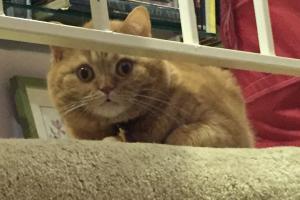 I'm waitin' on Meowmuh to come upstairs to go to bed. My dumb sibs sleep on her bed. Me? Nope. I stay on the floor 'cause I have to watch her. If she gets up during the night, I get up & walk with her. The others just stay on the bed. When... 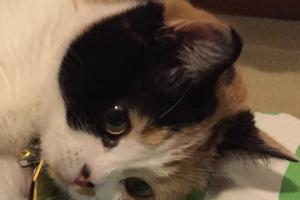 I'm waitin' for Meowmuh to come to bed. I sleep on her ankles. What's wrong with that? Where do you like to sleep? Oh, goodie, here she comes. But it takes her furr-ever to get ready for bed. I'm glad I don't have to set my hair or brush my teeth...