PETER COTTONTAIL is the temporary name that Peter Rabbit  gave himself in the first book written by Thornton Burgess, “Old Mother West Wind..”  In the story, Peter Rabbit thought the name Peter Cottontail made him sound more important.  The author, Thornton Burgess, was an American conservationist and author of children’s stories.  He loved the beauty of nature and its living creatures so much that he wrote about them in his books and newspaper column, “Bedtime Stories.”  By the time he retired (in 1960), he had written more than 170 books and 15,000 stories for his daily newspaper column.  In his first book (as indicated above), the reader meets many of the characters found in later books and stories.  They include:  Peter Cottontail, Jimmy Skunk, Sammy Jay, Bobby Raccoon, Little Joe Otter, Grandfather Frog, Billy Mink, Jerry Muskrat, Spotty the Turtle, Old Mother West Wind and her Merry Little Breezes.

Hippity hoppin’, Easter’s on its way

Try to do the things you should

You’ll wake up on Easter mornin’

And you’ll know that he was there

When you find those chocolate bunnies

The “Here Comes Peter Cottontail” song is often regarded as one of the most popular Easter songs.  Walter ‘Jack’ Rollins and Steve Nelson, American musicians, co-wrote the song that was used in the Easter special of the same name in 1949.  They also co-wrote the song, “Frosty the Snowman” in 1950.  Rollins wrote songs for the public-service mascot, Smokey the Bear as well as other country songs for Gene Autry, George Jones and Eddy Arnold.

In 1950, Gene Autry recorded the holiday song “Here Comes Peter Cottontail” which became popular on the Country and Pop charts and informally gave the Easter Bunny a name.

Priscilla and Otto Friedrich wrote a novel “The Easter Bunny that Overslept” in 1957. 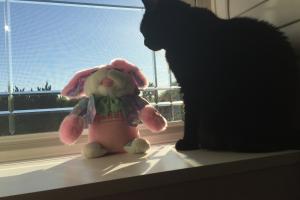