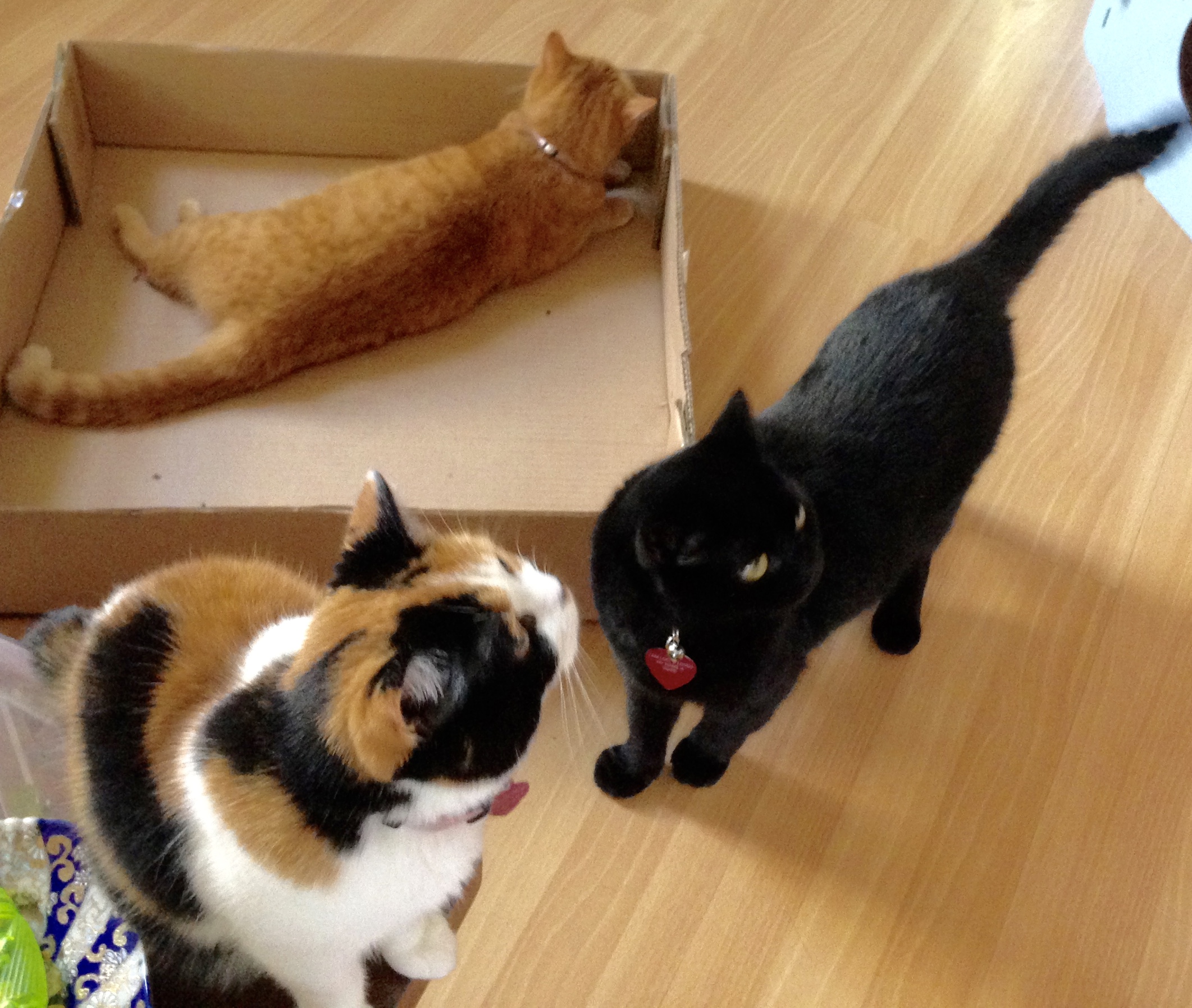 Three of the Cat Authors are Scottish Fold Straight-Eared cats.  They are wide-eyed, curious, playful, attentive, not real talkative (except when they want to eat) and VERY soft-voiced.  And that is where the similarities end.  Gracee (the red-orange Cat Author) is bossy (including swats and hisses), high-strung and ever watchful.  She hangs back when two-legged critters visit.  Inkee-Bear (the all black Cat Author) is the total antithesis.  He is laid back and social.  He greets two-legged visitors by stretching out on the floor in front of them.  Sophee (the calico Cat Author) is also laid back, extremely curious and playful.  She doesn’t want to miss a thing. She is ‘right there’ when two-legged visitors enter the house.  Sometimes she climbs up on the catwalk to look down on the visitors.  She always wants to play.  When my friend brought her dog into our house, it was Sophee who touched her nose to the dog’s nose despite the fact that the dog barked loudly scaring the other cats away.  All three Scottish Folds purr loudly when they are petted, groomed or when they eat.  Inkee-Bear is a lap cat.  He has a way of jumping into your lap, becoming a purring machine and rolling over on his back giving slow eye blinks known as kitty kisses.

Their breeder, Olga Parmalee, advises that Scottish Folds are born with their ears straight.  At about 2 ½ to 5 weeks, their ears might fold.  If their ears are real tiny, they take longer to fold.  She indicates that breeders want the kittens to have long tails and tiny, folded ears for showing.  When the breeding is wrong, the tails are too short and they get a disease similar to a severe arthritis.  To avoid this outcome, a folded male should never breed with a folded female.  As indicated, the recessive gene will give the kittens SEVERE arthritis.  A straight-eared male bred with a straight-eared female will never produce kittens with folded ears.  Olga breeds some of her females with a British Short Hair to keep the rounded owl look and to avoid the problem of arthritis (from the recessive gene). Her daughter breeds British Short Hair kittens.

Scottish Folds come in many different colors and patterns.  Folds frequently sit up and balance on their hind quarters…similar to the meerkats that we see on nature shows.  All Scottish Folds have big eyes that give them an owlish appearance.  They weigh between 6 and 13 pounds and live for 13 to 15 years or more.  There is also a longhaired variety known as the Highland Fold.  As indicated, some have straight ears and some have folded ears.  For show, the folded ears are sought but the straight-eared Scottish Folds have the same pleasing personalities and will not have the recessive or mutant gene.  The health problem created when two cats breed that carry the recessive gene (a folded male with a folded female) will be addressed in a future article.  It is a painful outcome for the kitten and the new owner.

Information for this article was obtained from our Scottish Fold breeder, Olga Parmalee; the website vetstreet.com as well as my own experiences with the Cat Author Scottish Folds and our beloved Charlie Brown, a rescue Scottish Fold who crossed the Rainbow Bridge with kidney disease at the age of almost 19 years. 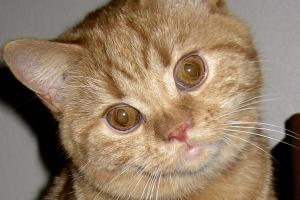 I'm a Scottish Fold Straight-Eared kitten in this pic. But I'm all grown up now. I'm the oldest Cat Author & in charge of these hooligans. Read RELATED MEWS 'N NEWS article to learn about "Scottish Folds."