What do you know about Valentine’s Day?  As usual, I wanted to know the “who, what, where, why and when” of this annual celebration.  I was surprised to learn how the traditions that we associate with Valentine’s Day began and how early they began.  The early links to Valentine's Day were focused on sacrifice as indicated below.

Modern Valentine letters later adopted the expression “From your Valentine”.  According to legend, Saint Valentine cut hearts from parchment and gave them to these soldiers and persecuted Christians to remind them of their vows and God’s love.  It is possibly the origin of the widespread use of hearts on St. Valentine’s Day.

Saint Valentine supposedly wore a purple amethyst ring, customarily worn on the hands of Christian bishops with an image of Cupid engraved in it.  Probably due to the association with Saint Valentine, amethyst has become the birthstone of February, which is thought to attract love.

European folk traditions connect Saint Valentine with the saints of spring, the saint of good health and the patron of beekeepers and pilgrims.  Plants and flowers start to grow on this day.  It has been celebrated as the day when the first work in the vineyards and in the fields commences and when the birds propose to each other or marry on that day.  Valentine’s Day has only recently been celebrated as the day of love.

The day was first associated with romantic love by Geoffrey Chaucer in the High Middle Ages or the 14th century when courtly love was popular.   Chaucer wrote:  “For this was on Saint Valentine’s Day, when every bird cometh there to choose his mate.” The earliest surviving valentine is a 15th-century poem written by the Duke of Orleans to his wife.  In 1797, a British publisher issued “The Young Man’s Valentine Writer” which contained suggested sentimental verses for the young lover unable to compose his own.

Valentine’s Day evolved into an occasion in which lovers expressed their love for each other by presenting flowers, offering confectionery and sending greeting cards in 18-century England.  In 1835, 60,000 Valentine cards were sent by post in Britain.  Handwritten notes have given way to mass-produced greeting cards that are giving way to printable cards and most recently, e-cards.  In the United States, the average valentine’s spending has increased every year, from $108 a person in 2010 to $131 in 2013.  Valentine’s Day celebration has and is spreading to many countries other than Europe and the United States.

Information for this article was summarized from the Wikipedia website. 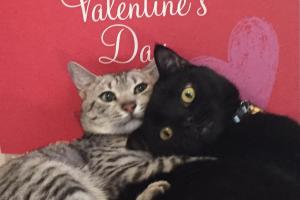 SPIRIT: We wish you a "Merry Valentine's Day!l"

SPIRIT: Ok, Happy Valentine's Day!  Hey, Mr. Purr-fect, will you get your gi-normous head out of my face?