WHY DO R CATS RUB AGAINST THINGS?

Cats rub their faces on and against objects for many reasons, depending on the context or object being rubbed.  When our cats rub their faces (mouth, chin, side of face, neck and/or ear) on an item, they are leaving a scent. Sebaceous glands produce sebum at the base of each hair follicle.  These glands are most numerous around your cat’s mouth, chin, lips, upper eyelids, the top of the tail bases, near the anus and sex organs.    The act of a cat rubbing his head on objects is called “bunting.”   Using the scent glands located on the head and around the mouth, our cats will frequently rub against protruding objects in their territory which might include:  a corner that sticks out, computers, doorways, table legs, our legs, chairs, bedposts, shoes, lampshades and even the corners of a box, book or iPhone.  Whenever I read a magazine or newspaper, my cats are constantly rubbing against the paper, book or magazine and the iPhone or the iPad sometimes nearly tearing the paper and knocking the objects out of my hands.  Is it annoying?  Yes, sometimes.  But to them, the rubbing is comforting.  In contrast, scent marking done from the other end of our cats (spraying) usually indicates a perceived threat.

Per feline behaviorist Pam Johnson-Bennett:  “Rubbing is a friendly social behavior.  Cats that live together will allorub (mutual rubbing) and allogroom (mutual grooming) quite often.  Cats in the same home will often rub each other in passing as a way to reinforce a familiar “family scent.”  Our cats sometimes rub their heads against our faces.  The latter behavior is called “bunting.”  It is a gesture of family acceptance and love.  They might rub along our chins and noses.  Kittens begin ‘bunting’ when they rub around their mother’s head seeking to nurse.  Purring can accompany the rubbing behavior.  If our cat’s emotion becomes intense, they open their mouths slightly, exposing more of their lips.  Some cats get so carried away that they even drool.”

Per Virginia Wells in an article for PetPlace:  “Cats have several different pheromones that send signals and affect different behaviors.  One is to provide information about reproductive status.  Some pheromones signal comfort and familiarity.  They are unique, like human fingerprints.  The pheromones secreted by the scent glands on the face have a calming effect.  Other cats passing by will often stop and sniff, sometimes rubbing their faces on the object to leave their scent as well.  Pheromones convey information to other cats such as the identity of the cat, when he was there, which direction he was headed and even what kind of mood he was in.  When we stroke our cats or they rub against our legs, we then carry these scents too.  Thus, we have a ‘group scent’ identification.

Cats also use rubbing to communicate urgency.  Spirit loudly meowls and bump-rubs against me.  The other three Cat Authors (Gracee, Sophee and Inkee-Bear) give gentle rubs accompanied by their soft, usually ‘soundless’ (just opening their mouth) meows.  However their sense of urgency is clearly expressed in their facial expressions and their body position when they stand on their rear legs and/or sit up like Meer cats in the wild.

Bunting is an affectionate gesture that reinforces relationships based on physical contact and aroma sharing.  When our cats rub against us, they are in effect claiming us as their own.

Information for this article was obtained from the following websites:  vetstreet.com and petplace.com.  Additionally, information was obtained from the following books:  “Think Like a Cat” by Pam Johnson-Bennett and “Cats for Dummies” by Gina Spadafori and Paul D. Pion, DVM, DACVIM.  Additional commentary provided by my own experiences with cats, especially the Cat Authors.

Both Inkee-Bear & Gracee have already rubbed Yalila's shoes, leaving their scents. Now I'm leaving mine. It is always exciting when Yalila is at our house. Do we get in her way?  No, we are her little helpers. She laughs & talks to us....

Moi?  Why do I rub against things? Well, for one thing, I feel calmer. As you might already know, I am anxious. By leaving my scent on every  thing that I can in our house, I feel more secure. One thing I don't do...I don't rub against Inkee-Bear... 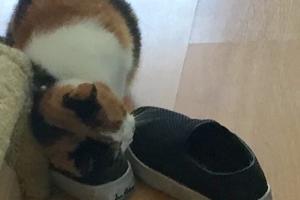 All of us four-legged meowies love our friend, Yalila. When she comes to visit, we rub against her shoes. We also rub against purses, clothing...especially our web designer's (Jeff Sites) laptop carrier. C the next 2 videos to see us...