THEY'RE LOOKIN' FUR WHAT? 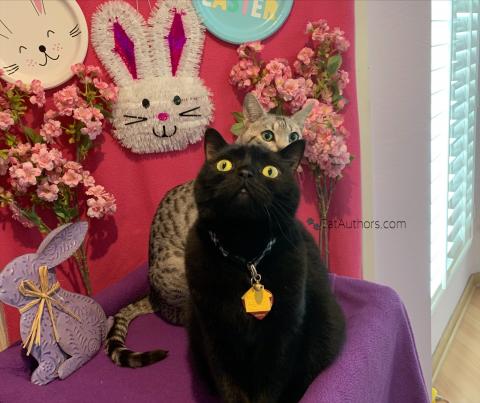 INKEE-BEAR:  Do you hear it? SPIRIT: Hear what?  INKEE-BEAR:  You dummy. Something is on our roof. it's not walkin' -- it's hoppin!  SPIRIT:  Well, truth be told,  I can't hear a thing except baby birds chirping their little beaks off in the eaves outside our front door. They don't stop until the sun goes down! 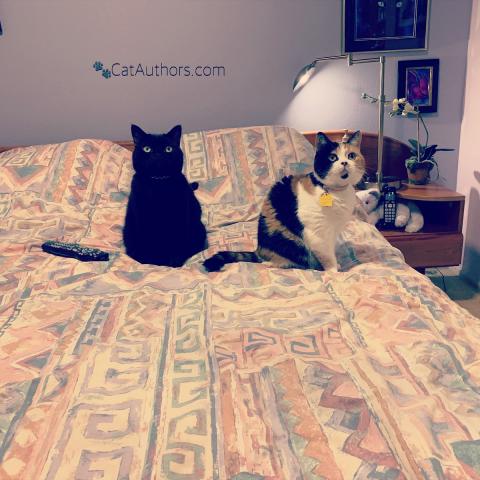 RESTIN' UP FOR SAINT PATRICK'S DAY 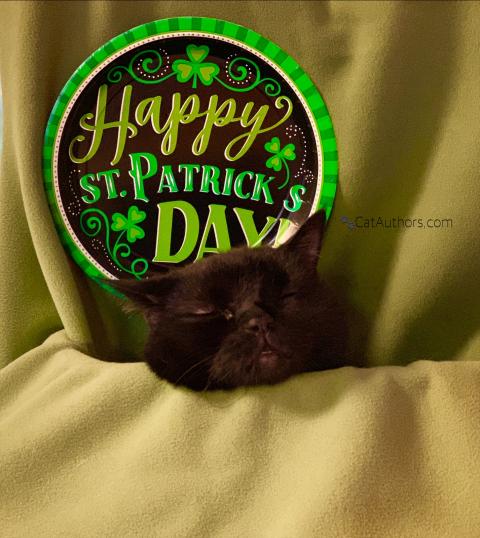 I'm not entirely sure what our hooman has planned for Saint Patrick's Day. But, I want to be ready so I'll start restin' up right here, right now. Then, before she wakes up, I move up the stairs, jump on her bed, curl up & go back to sleep. Then, when she wakes up, I'm the first feline she sees! I go into my purr mode immediately. Can't help it. 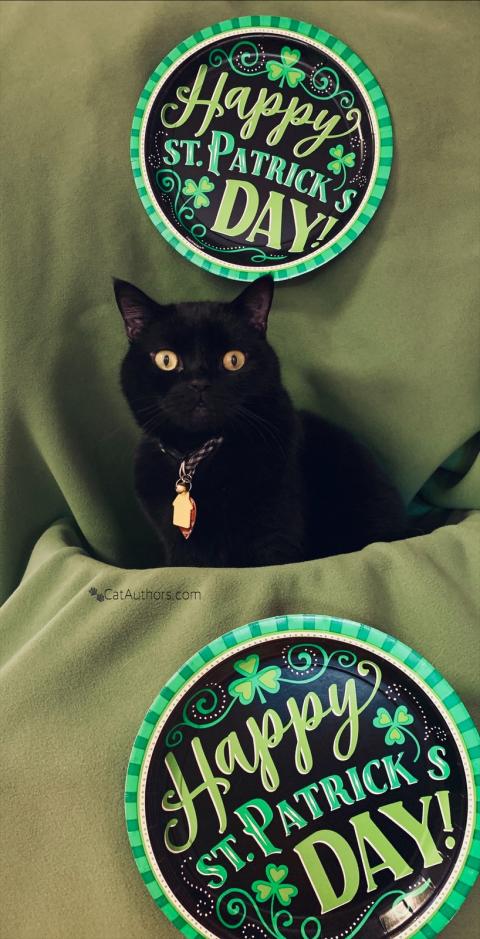 All Spirit thinks about is partying or, as he puts it -- purr-dee-ing.  On the more serious side, see the three leaf plant on our plates? That's a shamrock. The word 'shamrock' comes from the Irish word for 'young clover.' The Druids believed that a three-leaf clover would enable them to see evil spirits & escape in time. 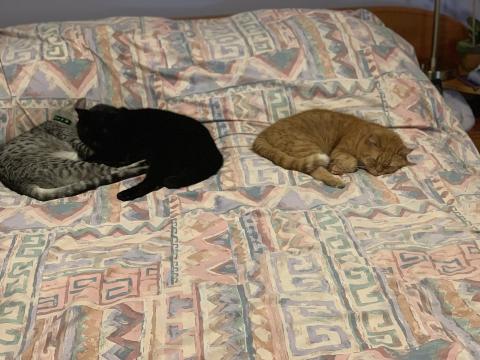 Today — Monday, March 11 is NATIONAL NAPPING DAY!! Did you know that? It’s always the day AFTER the return of Daylight Savings. It’s to compensate for that lost hour. 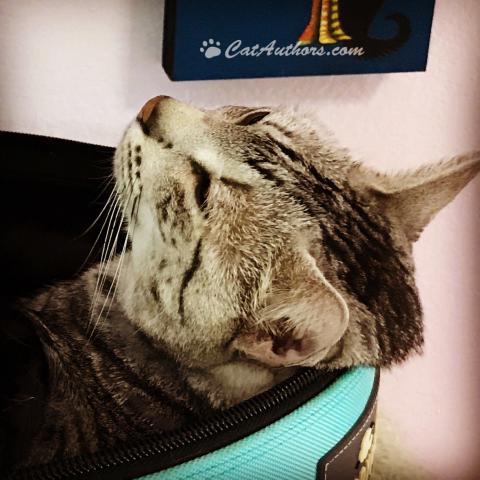 Yep. Spirit, the youngest in our herd, isn't waitin' up for our hooman. He's dead to the world, so to speak. Thankfully.  Lemme' tell ya', when he's awake -- look out. He runs over 30 mph. He crashes into things, into us, into our hooman. He chases us & toys that our hooman throws. He's a genuine action figure when he's awake. So, sleep tight, little guy. 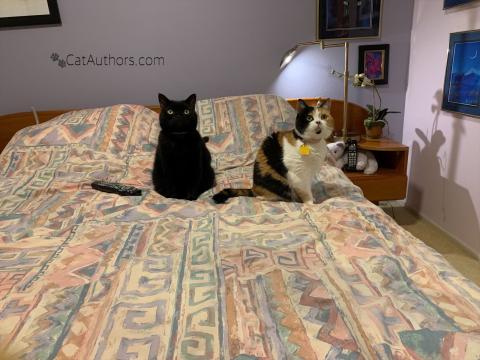 Our hooman's been sitting in front of that screen for a long, long time. It's very late. Maybe she's writing about us. We help her as much as we can -- including not stepping on the keys in front of the screen. She tells us: "Be careful, don't step on the keys." I never do but some of my sibs -- well, sigh. It's been dark out for a long time now. So, we're waiting for her to come to bed. 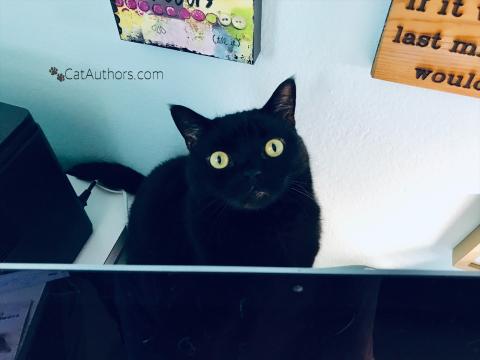 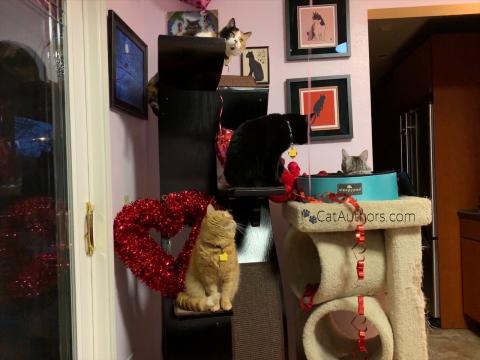 Our hooman’s taking a break from our photo shoot. Maybe she’s frustrated cause we keep moving, scattering. In this pic we’re lookin’ in different directions, we’re on different levels, we’ve been pouncing on the ribbons that dangle from those bah-loons that keep moving — scraping & bouncing on the ceiling & walls. You know we cats LOVE anything that moves. 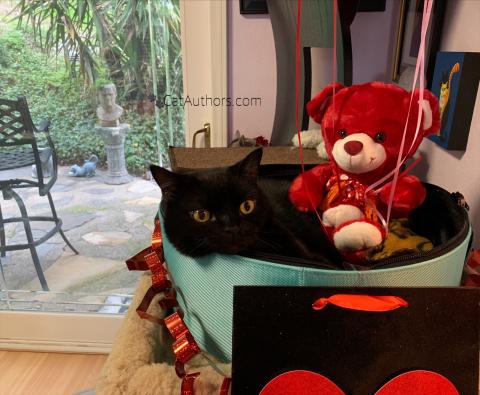 Tomorrow is Valentine’s Day?  The Valentine Bear is here, but that’s not good enough!  I still don’t have my Valentine!! Will YOU be my Valentine? Puhleeze?